Compact fluorescent lamps, or CFL’s, emit light when electricity excites the mix of gases inside the bulb, creating high energy, invisible, ultra-violet light, which is absorbed by the bulbs fluorescent coating and transformed into visible light.  They are sold in a variety of color temperatures, usually specified in Kelvin (K), providing a range of options to suit your specific lighting needs.

If you need clean, soft illumination for the kitchen or bathroom, a cool white 3500K– 4100K CFL is a good choice.  And for reading areas and workspaces that require more light, the daylight 5000K – 6500K CFL bulb cast a bright, cool glow that is ideal for detail oriented activities.

WHY USE CFL BULBS?

·         CFLs or compact fluorescent lights, are quickly becoming the low-energy bulb of choice for those concerned with the environment and reducing energy bills.

·         CFLs can fit into most common household sockets and fixtures, making the switch is very easy.

·         Though the cost of the bulb is slightly higher, longer life span and less energy usage will lower annual costs.

How Do I Get the Most from my CFLs?

1-Do the TWIST: Screw in your CFL by holding the ballast (the white plastic part), NOT the glass tubing.

2-Don’t flip too FAST: You'll maximize the lifetime savings and effectiveness of your CFLs by keeping them on for 15 minutes or more at a time.

3-Choose 3 for 3:Only use bulbs labeled as three-way on three-way sockets.

4-Don’t dim a non-dimmable.:Only use bulbs labeled as dimmable on dimmer switches.

5-Check your controls: Most photocells, motion sensors and electric timers are not designed to work with CFLs. Always check with the manufacturer of the control for compatibility.

6-Give them air: CFLs are sensitive to extreme temperatures, so place your CFLs in open fixtures indoors. Using them in enclosed fixtures indoors can create a hot environment that reduces the lifetime of your bulbs.

7-Protect them outside: Protect bulbs from the elements by placing them inside enclosed fixtures outdoors.

·
CFLs contain a very small amount of mercury sealed in the glass tubing 4 milligrams on average. By comparison, older thermometers contain about 500 milligrams of mercury.

·         Mercury is an essential part of CFLs; it allows the bulb to be an efficient light source.

What are mercury emissions caused by humans?

Most mercury emissions caused by humans come from coal-fired electrical power. Mercury can be released into the air, get into water, bio-accumulate in fish and then be mistakenly eaten by humans.

Most mercury vapor inside fluorescent bulbs becomes bound to the inside of the bulb. if a CFL bulb is broken, the rest of the mercury about 14% is released into air or water when it is sent to a landfill.

How do CFLs result in less mercury in the environment compared to traditional light bulbs?

Electricity use is the main source of mercury emissions. CFLs use less electricity than incandescent lights, meaning CFLs reduce the amount of mercury into the environment.

Since CFLs help reduce greenhouse gasses, other pollutants and landfill waste (because the bulbs last longer), they are clearly the environmental winner when compared to incandescent bulbs.

What precautions should I take when using CFLs in my home?

CFLs are made of glass and can break if dropped or roughly handled. Be careful when removing the bulb from its packaging, installing it, or replacing it.

Always screw and unscrew the light bulb by its base and never forcefully twist the CFL into a light socket.

If a CFL breaks in your home

When you buy CFL bulbs the package will be labeled to show you how many watts it's equivalent to.  For example, a 15-watt CFL bulb package will say something like "60 watt equivalent". They have to say that otherwise people would look at the package and think, "15 watts? That's not nearly enough light!" But it is, because a 15-watt CFL bulb puts out as much light as a standard 60-watt bulb.

Make sure to get a color temperature you'll be happy with.  The light bulbs you're replacing are probably "warm", around 2700k.  Anything above ~3500k will have a bluish tint to it, and the higher the blue, the "colder" (more blue) it gets.  If you want similar light to what you probably have now, go for "warm" CFL's, less than 3500k, the lower the better. 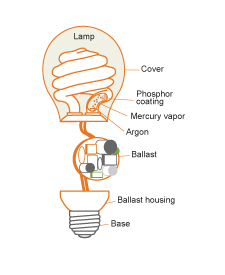 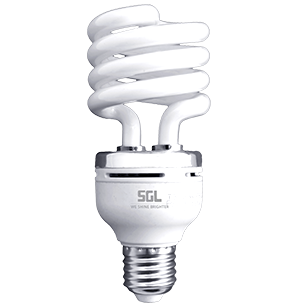